We’re following up on Part I where we explored the Driven Data blood donation data set. The objective of the present article is to explore feature engineering and assess the impact of newly created features on the predictive power of the model in the context of this dataset. The random forest model provides an easy way to assess feature importance. Depending on the library at hand, different metrics are used to calculate feature importance. We compare the Gini metric used in the R random forest package with the Permutation metric used in scikit-learn.

Feature Engineering consists in creating new predictors from the original set of data or from external sources in order to extract or add information that was not available to the model in the original feature set.

Feature Engineering is an art in itself. It keeps the human savoir-faire in the field of Data Science. Adding new features can results in worse performance and cross correlation between features can hinder feature importance interpretation.

Feature Selection consists in reducing the number of predictors. A technique particularly important when the feature space is large and computational performance issues are induced.

There are many Feature Selection techniques and algorithms which are all based on some form of assessment of the importance of each feature.

There are 3 ways of assessing the importance of features with regard to the model predictive powers:

Feature importance is also used as a way to establish a ranking of the predictors (Feature Ranking).

Besides the obvious question on how to actually engineer new features, some of the main questions around feature engineering resolve around the impact of the new features on the model.

These questions have been addressed for the most part in the litterature.

Many studies of feature importance with tree based models assume the independance of the predictors. See Zhu et al. Reinforcement learning trees and Scornet et al. Consistency of random forests - pdf for instance.

However, empirical results show that size and correlation factor both decrease the Feature Importance.

There is no doubt that Feature correlation has an impact on Feature Importance!

Correlation of features tends to blur the discrimination between features.

Several measures are available for feature importance in Random Forests:

Gini Importance or Mean Decrease in Impurity (MDI) calculates each feature importance as the sum over the number of splits (accross all tress) that include the feature, proportionaly to the number of samples it splits.

Permutation Importance or Mean Decrease in Accuracy (MDA) is assessed for each feature by removing the association between that feature and the target. This is achieved by randomly permuting the values of the feature and measuring the resulting increase in error. The influence of the correlated features is also removed.

See Gilles Louppe PhD dissertation for a very clear exposé of these metrics, their formal analysis as well as R and scikit learn implementation details.

Back to Blood Donations

In the context of the blood donation dataset, the original number of features is very limited. 3 in total: Recency, Frequency and Time. see Part I for an explanation of these variables.

From the reduced number of available features, we try to engineer new features to improve the predicting power of our Random Forest model.

We discuss the influence of correlated features on feature importance. Since we are only creating features from the original set, many new features will be will have high cross-correlation .

Our setup is the following. The code can be found here

For each seed / simulation:

Our different sets of features are

For the first 3 features original features we have the following scores:

Feature Importance as computed via the Random Forest package on the held our set is:

It is worthwhile to note that Frequency and Time are correlated (0.61) which could explain why Gini picked one feature and Permutation the other.

And we notice a significant improvement on the logLoss metrics

However, now Gini and Permutation have the same top 5 features based on Time although in a different order and with different weights.

(The weights have been scaled)

Some features are very correlated although not among the same original feature derivation. 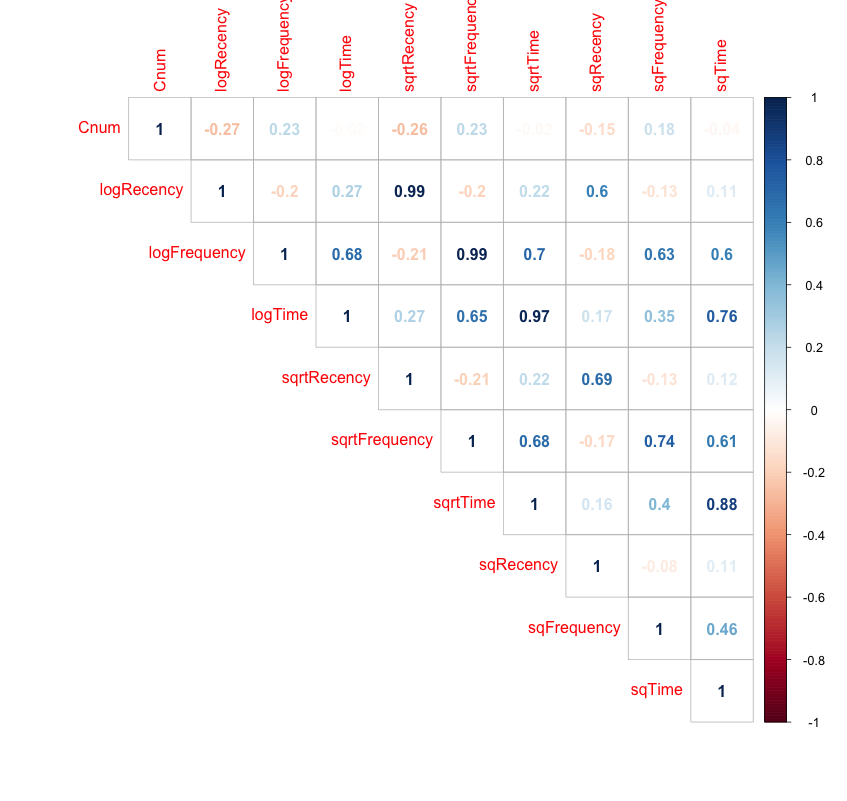 We ran the simulation for all sets taken separately and combined. The final scores are:

We can make the following observations on logLoss score:

No significant impact on Accuracy or AUC from any of the sets or their combination or selections. The Differences are within 1 / 2% of the original feature set.

In terms of feature importance, Gini and Permutation are very similar in the way they rank features. 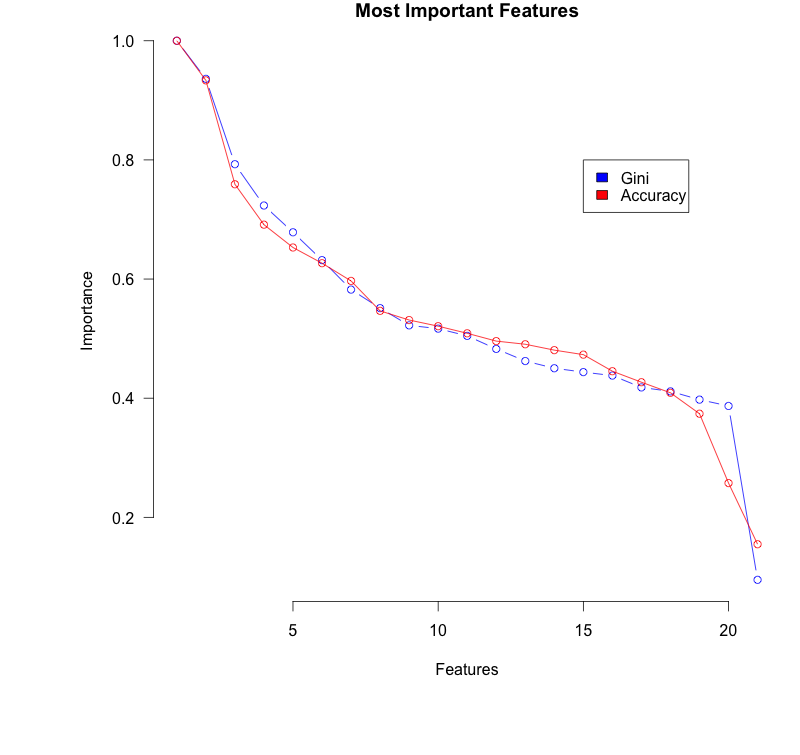 The impact of this difference can be observed in the difference between the Permutation most important and Gini most important: Gini requires higher level of mtry (5.3 vs 1.8) (mtry is averaged over 10 different sun / seed, hence the decimal). Gini needs to capture higher levels of feature interactions. Gini struggles more it would seem. Permutation seems to capture importance better although this difference is small.

However when selecting the most important features for Gini and Permutation the test set logLoss is comparable.

Overfitting One noticeable thing is the difference between logLoss and logLossCV, i.e. the logLoss on the hold out set and the logLoss obtained during Cross Validation.

Although we did not end up with a major improvement on the original score by adding newly engineered features, some interesting phenomenon were observable.

This is obvious when we use Set 1 and observe that the most important feature (Time for Gini and Frequency for Permutation) is now divided between the 3 new features (logTime, sqrtTime and sqTime).

2) The effects of feature set combination on the held out set score look very linear: A better set associated with a worse set ends up with an average score. (see Set 1 + 2 and 1 + 2)

3) However, these non linear effects of feature combinations are visible on the Cross validation Score. For instance the score of sets 1 and 2 is better than the score for either Set 1 or Set 2

4) Feature ranking and relative weights end up being very similar when used to select a subset of most important features. Non significant difference can be observed on the model’s predictive power.